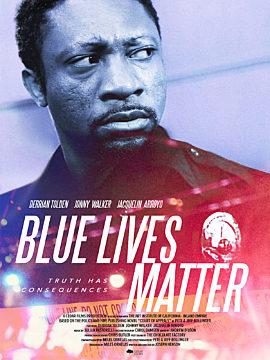 In light of current events, being able to be open minded and understand the cause, there are many films available to watch and take a different approach towards understanding and extending the feelings to a further level. Within the films, the storylines will give the audience the emotions and perspectives in the currently debated topic; Police Misconduct. The storylines, filled with details relevant to everyday news seen both on press and social media, are great passageways for those looking to feel the view of those directly involved.

Some films are available to watch in different platforms that will suit your needs.

The film, directed by Joseph Henson, gives the story of an African American policeman that after shooting a gang member is falsely convicted of murder. When he sees that everything in his life will be wrongly affected, he takes matters into his own hands. The movie plays an important storyline in which societal problems, currently shining bring today, and the feeling of frustration surround the main topic.

Directed by Harold Jackson III, touches on various points that will put the police’s side on the edge. The story, based on a police officer’s journey through a dowspiral set of events. The film touches on today’s relevant hot topics in terms of police brutality, the main issue; shooting and killing an unarmed man at a routine traffic stop. When the story unravels, it offers different perspectives that will change the audience’s views. The journey through the details that are coated in the prejudice, stereotypical, and racial profiling that affects many in today’s society and has led to the marching of thousands across the nation to voice their opinion.

Directed by Craig Atkinson, the documentary shows, with a more supportive view that is complemented by the documentary “Whose Streets,” the captured the moments in which the police is rapidly militarized and the excessive use of power in the Ferguson protests and other parts of the nation. The topics discussed connect in a timely manner to today’s issues; the use of harmful items, the excessive force, and the instigation to violence from those employed to keep safety. With a closer look at the other side of the coin, the behind the scenes feeling will give a different perspective at the mindset that led to more police misconduct.

The documentary, crafted by Sabaah Folayan, when unarmed teenager Michael Brown is murdered by police, the town of Ferguson, whose tipping point was the treatment towards Michael, who was left on the ground for hours. The documentary is told and lived by those involved in the movement; which also shows the abuse of power and unnecessary gear from Police to Civilians. The film, through the close view to the actions and its stakeholders, can show the precedents to the current events in which a peaceful protest is turned violent due to police incitement.

The film directed by Sarah Burns , David McMahon , and Ken Burns, shows a heavy topic of police dishonesty that reflects the false accusations that are in the justice system. After the failure of police investigation and a weak case, five young african americans were wrongly sentenced for a crime they did not commit. The film shines the light at the systematic racism that is embedded in the trials performed. To offer a better look at the bigger picture of the recent historic movement.

You can stream Blue Lives matter on Vyre for free on Apple TV, Roku, Amazon Fire Stick, Android, iPhone, and on the web. To download Vyre log on to www.watchvyre.com

Major Movie Star talks: If Major Movie Star was not a success at the American box office, he is nevertheless excellent and cult by his writing and the many references it contains.

Jessica Simpson is amazing as Megan Valentine, a successful actress who loses everything and finds herself in a world opposite to her: that of the army. She knows how to play well on all levels and is a good actress. Vivica A. Fox is scary as Sergeant Morely, but she does that, because that’s her job, and as a result, I appreciate this character better and better as the story unfolds. Simpson’s sidekicks are also excellent, when to Ryan Sypek, I think he makes a nice couple with Jessica.

This film is a duel between the artistic world and the realistic world of the army, while demonstrating the superficiality of the 1st universe, facing the hardness of the second, thus giving a contrast between the two for the spectator. And through this, if Megan may seem futile, she never was, but is just aware of the world she lives in and therefore, I feel sorry for her.

There are a lot of references, whether it’s at the level of the dialogues, the names or the situations mentioned. For example, when Megan talks to the dog, it makes you think of the film « Beethoven » or when Petrovich quotes one of Megan’s films «disco balls in time», which refers to « Austin Power Goldmember ». Megan Talks to her car and I saw a big wink at k2000, not to mention when Nigel calls Amber “Catwoman” or when Megan is cheated by her boyfriend, who has an affair with her art agent, as was the character of Lester in the movie “American Beauty”.

I also perceived references with the names of the characters, because Steve Guttenberg plays Sidney, an agent and it reminds me of the series Alias, because Jennifer Garner plays Sidney Bristow, an agent. I also see a reference to Scary Movie, because Kurt Fuller and Cheri Oteri are both in that movie, not to mention “Carrie”, when Nigel said to Megan, “These rules were of Satan”. I also feel a big wink to Police Academy, a policeman who puts chaos in his police academy played by Steve Guttenberg, while Megan makes a mess in an army. I would even say that it may also refer to the Disney movie “Cadet Kelly”, because of the situation of seeing a woman in the army, while observing that the actress Aime Garcia also played in this TV movie.

Finally, there are so many references at the level of dialogues or scenes played, that it makes the film cult and brilliant by its writing and that it must be rehabilitated, because it is just a masterpiece. View the movie review here Major Movie Star cult movie review.

If Blonde Ambition which is an independent film was a failure at the American box office, but a success in other countries, it remains no less cult and here are the reasons.

First: her casting. Jessica Simpson plays the sparkling Katie Gregerstistch perfectly and I love seeing her on screen. As for Luke Wilson, who interprets Ben, a reserved man, I think they are very well together. The character of Mr Connelly, camped by Larry Miller is incredible as a busy business leader, not to mention Peneloppe Ann Miller and Andy Dick as villains of the story, who do everything to sabotage Richard and Katie, they are just beautiful.

The character of Ben, played by Drew Fuller is as well played, when to the character of Willie Nelson in the role of Papi, he brings a paternal touch to the story, which makes the story touching. But for me, my favorite character is Betty, played by Karen Mcclain whom I love. She is just phenomenal!! Thank you Karen, you are magical !!! Special mention to Rachael Leigh Cook, whose character of Hailie is very well played too !!

Second: his story has a lot to do with his cult status, because even though it was announced that it was a kind of remake of «Working Girls», it makes me think more of «Legally Blonde», about the fact that Katie, a naive girl, was dumped by her boyfriend and changes of life just like Elle Woods in the revenge of a blonde and just for that fact, it gives a hell of a wink to the film, especially as Luke Wilson also played in the revenge of a blonde.

The scene where Katie is having lunch at the restaurant with Debra and Freddy reminds me of “Miss Congeniality” or Sandra Bullock eating with Victor. Kathie also cites her native department Oklahoma, which can also make a reference to the 1955 movie where a cowboy loves two women, which is the case with kathie when she’s dressed as a cowgirl, but invites ben to throw the amber party, without it being a date, because she thinks too much about her old boyfriend Billy. When Katie and Ben take the Norwegians to a bar, they dress up as Vikings and I saw a nod to the movie “The Vikings” of 1958 with Kirk Douglas and Tony Curtis.

The scene of Katie’s makeover reminds me of the movie « Clueless », « Miss Congeniality », or « The Princess Diaries ». Watching Katie bend over backwards for Debra reminds me of “The Devil Dresses in Prada”, because “Anne Hattaway also does the same thing in this film with “Meryl Streep”.

In addition, the character «Ben» who says before bringing a pizza to Katie «you have a preference for the guys in the mail», made me smile, because it is a direct reference to an old Jessica Simpson movie: « Employee of the Month», when the character played by Jessica in the movie had a crush only for the employees of the month.

If the film says a few times that you have to read between the lines”, it’s not from one character to another character that they say that, but it’s the characters to the viewers, what causes a 4th wall and proves that this film is absolutely as well written, as awesome and just for that, it is cult !!

Thanks to the whole team for making this film!! Discover additional information at Blonde Ambition movie preview.